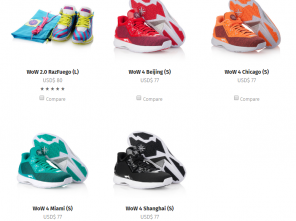 Last Year, Way of Wade released city themed Sweatsuit Packs for the Way of Wade 4 that came with 2 sneakers each.  Those packs (Shanghai/Beijing and Chicago/Miami) retailed for $333.  The great folks over at Sunlight Station have them INDIVIDUALLY up [...]

For a Limited Time, Both Way of Wade Sweatsuit City Packs are 40% Off!

The folks over at Way of Wade want you to get your Labor Day weekend started off right and have put their two sweatsuit packs on sale for 40% off! Each pack retails at $333, but for a limited time, [...]

The Way of Wade 4 “Miami” and “Chicago” Sweatsuit Pack is available for purchase now! The pack is $333, (for both shoes) and comes in a nifty two-tier box along with special insoles! You have a few options to choose [...]

Way of Wade is bringing the “Sweatsuit” pack once again to the Way of Wade 4, and this time the theme and inspiration behind the pack will represent the two cities Dwyane Wade has the closest ties to, Chicago and [...]