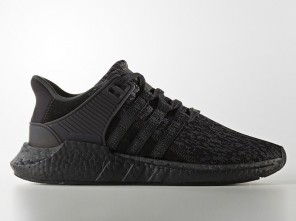 It was only a matter of time, and adidas has picked the most fitting date to release the Triple Black 93/17 EQT Boost!  Adidas has picked Black Friday, November 24th, 2017.  For now there isn’t a surcharge for the black [...]

The next adidas x Pusha T Collab is on the Horizon!

Mark it down on your calender, Saturday, December 3rd, 2016, is the set release date (confirmed by adidas) for the upcoming collab between adidas and rapper Pusha T. This upcoming collab looks like a hybrid primeknit EQT in grey with [...]

The EQT Support ’93 has it’s fair share of collaborations this year, with Packer Shoes in Teaneck, NJ, and celebrated collaborator Ronnie Fieg all getting their shot at designing a colorway on this 21 year old model. The general release [...]