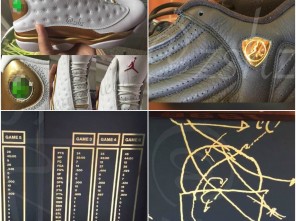 In 2006, Jordan Brand first introduced the Defining Moments Pack, or better know as “DMP”, which included a white/gold/black Air Jordan 11 (basically a Concord 11 with gold hits) and a mostly black/gold Air Jordan 6.  The limited pack is [...]

As many of you know, around the time of the release of the Jordan “DMP” pack, some samples featuring gold letters that spelled out “Jordan” on the side of the shoe were accidentally released in Nike Factory stores do to [...]

Released in 2009 as apart of the Jordan 7 DMP Pack with the Raptor 7, the Orlando Magic 7 commemorates Michael  Jordan’s 64 point game in the NBA playoffs versus the  Orlando Magic on January 16th in 1993. The upper [...]