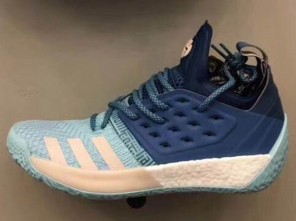 First Look at the adidas Harden 2.0?

This may be our first look at the adidas Harden 2.0 and I personally think it’s an improvement.  The amount of boost has increased and on top of that it appears less of it is caged this time around too. [...]

The Harden Vol. 1 looks to be getting a Salmon Toe like make over, which is absolutely appropriate and more than welcome. The good folks over at Weartesters are previewing upcoming adidas models (including a look at the recently release [...]

Adidas and Houston Rocket swingman James Harden  unveiled the adidas Harden Vol. 1 today.  Here are some quick hits from the unveiling.   – The initial colorway will be the “Pioneer”, a classic black, white, and red.  The colorway represents [...]

I am shocked! these styles are already on clearance, see the prices below, these are some serious deals!  Adidas Basketball has really made some big moves in 2016, and some of these models are great on court with some of [...]

Is this the adidas JHarden 1?

Photos have surfaced of what appears to be the upcoming signature basketball sneaker for adidas’ marquee signature athlete. The BOOST midsole looks to be set up similarly to the Crazy Explosive, minus the pods of exposed BOOST in the heel. [...]

He simply could not contain his excitement. In fact, Damian Lillard was so excited, he dropped a few bars and gave us our first look at his signature basketball shoe via Instagram and Twitter. Just looking at the construction of [...]