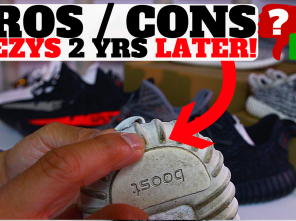 Here is a video where i discuss the pros and cons of the Adidas Yeezy Boost 350 thus far, about 2 years after the original release date of the Turtle Dove V1. Where to Buy Zebra Yeezy Boost 350 V2 [...]

Here is a look at the rumored Adidas Yeezy Boost 750 V2, supposedly releasing in 2017. No official word on this, as usual with most of these “early looks” but what do you think? The exaggerated wing on these remind [...]

Lots of news yesterday around Kanye West and his YEEZY line and a new deal with adidas.  No actual details about what the partnership includes, but it sounds like Kanye has put in a firm foundation with adidas from YEEZY [...]