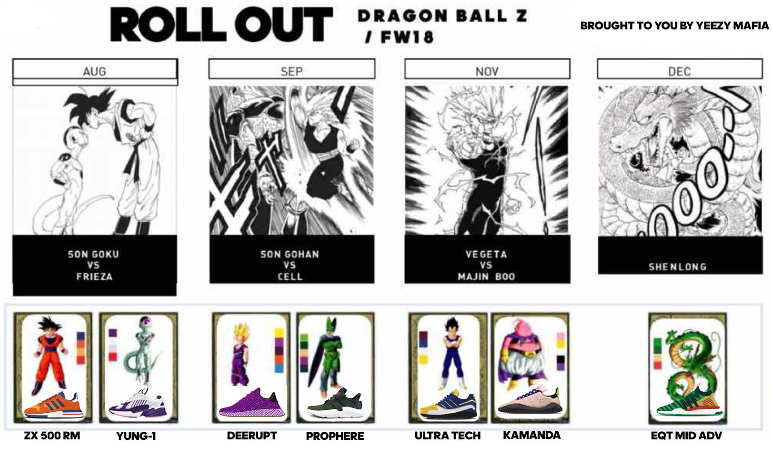 The good people over at Yeezy Mafia just tweeted a picture that revealed all 7 adidas x Dragonball collaborations.  Each sneaker is set to release in 2018 (September-December) and will come with a limited edition figurine.

The inspiration behind the 7 collaborations is 3 significant and memorable battles between a hero and villain.  That obviously only covers 6 collabs, so the 7th (fittingly) is inspired by Shenron, the mystical dragon that is summoned who is capable of granting any wish when all 7 dragonballs are gathered.

Goku vs. Frieza (August 2018)- This is probably the most significant and important battle that took place in Dragonball Z.  So many crazy things happened in this fight (Frieza did 3 transformations, Vegeta cried and begged Goku to defeat Frieza for the Saiyans before dying, Goku went Super Saiyan for the 1st time ever, Krillin dies again lol j/k).  Goku got the ZX 500 RM (Boost) and Frieza got the Yung-1.  Goku’s shoe has orange and blue hits like hi gi, while Frieza’s shoe is mostly white, purple, and light purple to match the colors of his head and body. 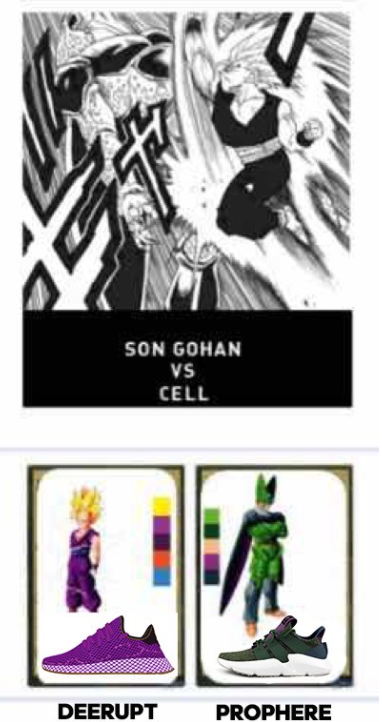 Gohan vs. Cell (September 2018)- Gohan finally got his moment to shine.  In this battle, Goku dies and when all hope seemed lost against Cell, Gohan goes Super Saiyan 2 (never accomplished before by any character) and is able to defeat Cell in the process (with a little help from his dead dad of course).  Gohan gets the Deerupt, which looks kinda similar to the Pharrell Williams Tennis Hu and Cell gets the polarizing Prophere which has already released in a few colorways.  Gohan is getting mostly a purple shoe, which is heavily inspired by his Piccolo-like attire in the battle with Cell.  Cell’s Prophere is mostly green with a few hits of purple, which matches his skin much like Frieza. 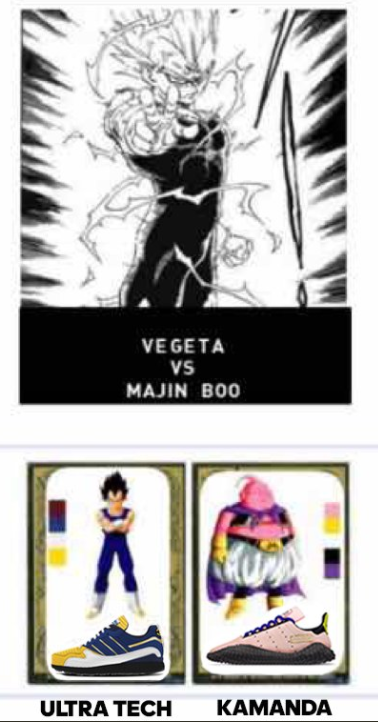 Vegeta vs. Majin Buu (November)- Probably one of the more emotional and shocking fights that took place in Dragonball Z.  An “evil” Vegeta, who intentionally became brainwashed to gain a power edge over Goku has an epic battle with Majin Buu, and in the end even sacrificed himself to try and protect the people he loved (too bad it didn’t work). Vegeta get the Ultra Tech, which is obviously inspired by his attire in the fight. Buu’s collab is inspired by the color of his body and attire, and his collab is on the Kamanda.

Shenron’s collaboration is on the EQD Mid ADV (December 2018).  The primeknit pattern is obviously inspired by Sheron’s appearance, and they honestly did an amazing job on the sneaker and in my personal opinion is by far the best of the 7.

I’m a huge Dragonball fan.  I grew up with it, own the entire manga series, and occasionally read it from time to time.  To someone like me, this collection is pretty underwhelming minus Shenron.  I feel like they could have done a lot more, by adding a lot more character details and branding on each collaboration.  For even a hardcore fan like myself, if I wasn’t informed which shoe represented which character, I would only be able to tell with confidence Shenron’s, Frieza’s, and Vegeta’s collaboration for certain.  Goku’s could be Krillins, it could be Yamchas, it could Yajirobe.  Gohan’s? I wouldn’t know who to guess for that one lol, that’s how impossible that one is to guess.  The Prophere could easily be Piccolo too, while I guess the Kamada is Buu by default because there isn’t a lot of pink characters.  I guess it could have been Oolong too now that I think about it lol.