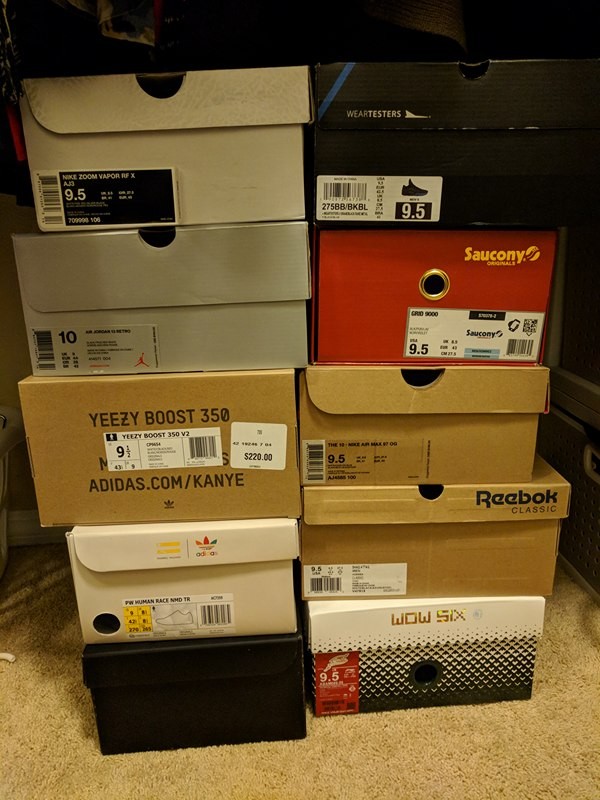 What’s going on Collectivekicks fam!?  I know, I know, Collectivekicks has mainly been a platform for the top sneaker deals of the week most recently, but with my man hypejon writing up a recent piece on his inspiring story of almost picking up the Off White Air Jordan 1 (read it HERE) I thought I’d add my top 10 pickups of the year to end 2017.

I feel like I’m a pretty well rounded unbiased sneaker enthusiast.  I’m not team 3 stripe life or team swoosh, I just like what I like.  But I’m also not going to sit here and pretend that hype doesn’t get to me every once in a while.  So sit back and relax, I hope you enjoy my top pickups of 2017. 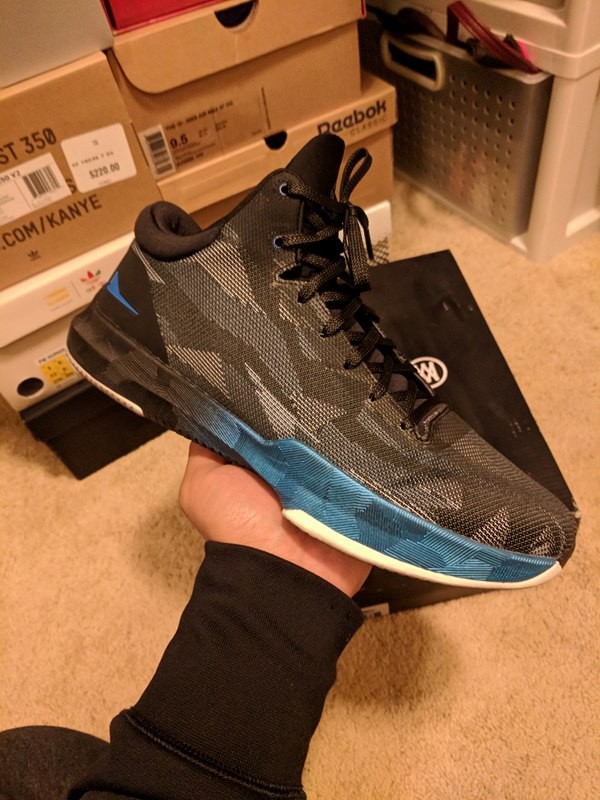 Let’s start off with the fact that I still hoop in my regular black and white Rare Metals and can confidently say it’s still my go to on-court choice.  With that being said, this second collaboration between Brandblack and Weartesters came out beautifully.  The first collab between the two was on the Ether model and had more of Weartesters black/white theme, but this time around the top dog at Weartesters, Nightwing2303, added more personal flair to the collab on the Rare Metal.  I am super happy I was able to get a pair and support him and his team. 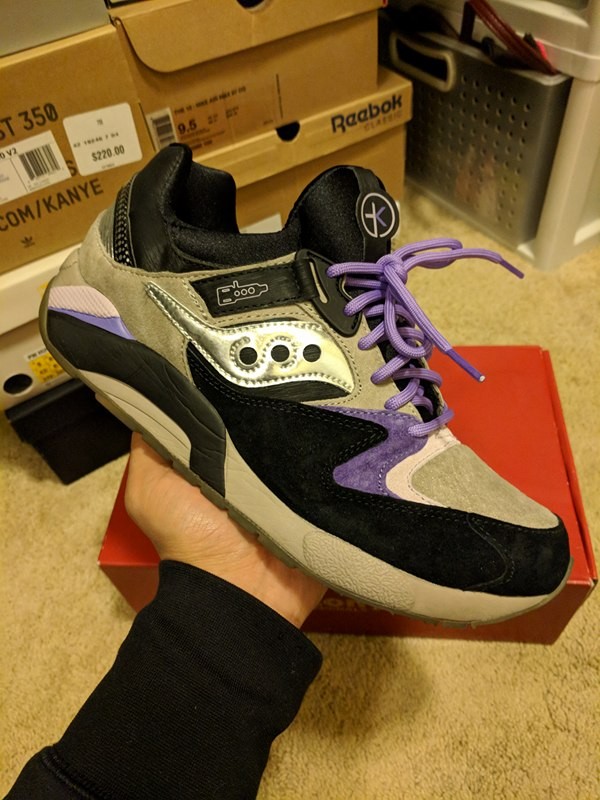 Biased? Maybe. There was no way this shoe was not making my list.  James, aka Heskicks, was kind enough to bring me on his staff a few years back.  Through this small blog, I was able to meet some great people and make lifelong friends.  When Saucony decided to give Heskicks a chance to collaborate on a sneaker, I was picking it up no matter what.  Could have I asked him to hook me up with a pair?  Sure, but I’ve always felt if you are truly trying to support a homie, you should support him and not ask for a free handout.  I got on Saucony.com the day of release and copped a pair the second they went live and am super proud to own a pair.  Job well done James!  Hopefully our 1 of 1 case was a dope gift! 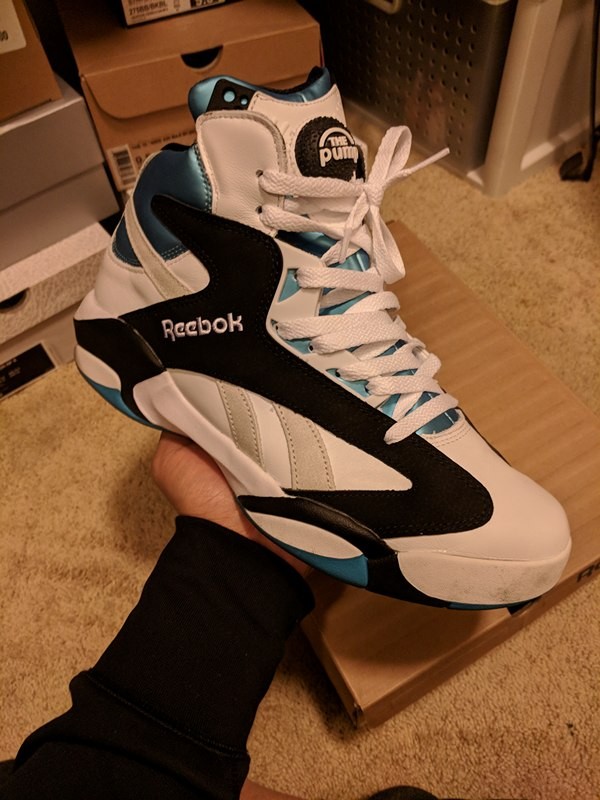 When they retroed these bad boys a few years back I was unable to cop a pair.  The resell price was really not to my liking and when Reebok decided to bring it back again and this time in larger quantities I was all in.  Patience indeed does save pockets as I was able to scoop these for the low low this year.  It is definitely my favorite Reebok basketball shoe of all time, and I really glad to have a pair now.  Kudos to Reebok for always using high quality materials on their shoes, the smell of genuine leather is something I can never get enough of.  (Shoutout to my Reebok heads Kicksreason and Noah from Weartesters!) 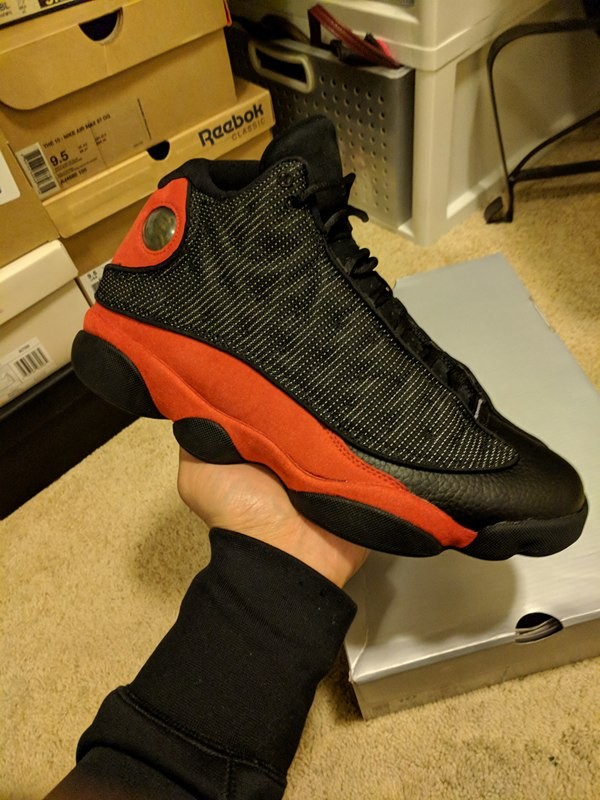 I had the non 3m version from a few years back, but I always felt it was subpar due to lack of the 3m.  Thank you Jordan Brand for giving us the correct version of the Bred 13 with the 3m upper.  Icing on the cake was on the OG styled box this year’s retro came in. The Jordan 13 is a shoe that came out when I was a junior in High School (yes I’m really old) and it was a shoe I really didn’t like at first.  But like a lot of Jordans, they grew on me and today the Bred 13 is one of my favorite Jordans of all time.  I’m really happy to have the “correct” pair in 2017. 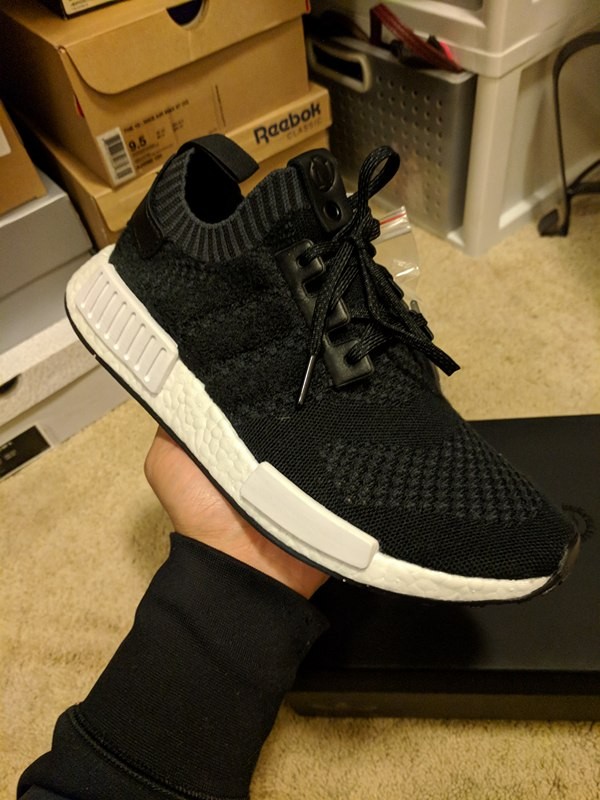 Sleeper of the year?  Yeah I think so, I really think so.  This shoe is so understated and underrated, my goodness.  I’m not even a fan of the NMD.  I have owned zero adidas NMDs until the later part of 2017, and have always preferred the Ultra Boost and 93/17 Boost models over the NMD due to the comfort.  But… if you throw a Ultra Boost 1.0 pattern, comprised of cashmere primeknit with luxurious leather hits all over (including extra leather laces) then it is just impossible for me to ignore.  I have a feeling this will a be a sneaker that a lot of people will look back on later and wished they picked up.  Glad I was able to get a pair for retail.

#5 The Way of Wade 6 Christmas 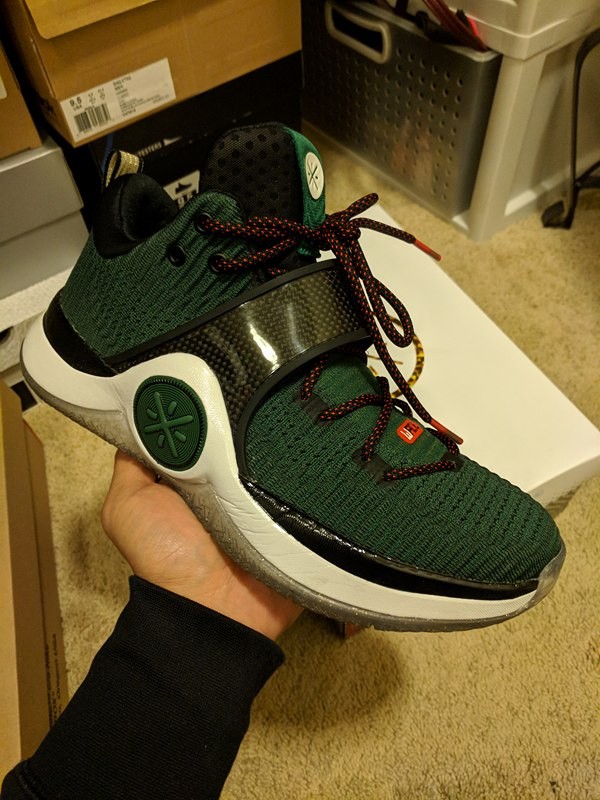 I already own 3 pairs of the WoW 6 (Sunrise, The Edition Art Basel, and the Christmas) but the Christmas joints are the hands down winner in my opinion.  I love the Christmas accents, but it’s subtle enough to wear all year round.  It’s a really nice shade of green, the hits of red and gold really just complete the shoe and I’m telling you guys right now this is by far the most comfortable WoW to date and rivals the WoW 1 and 3 as the best looking WoW to date.  They really knocked this shoe and colorway out of the park!  Shoutout to my people down under at Sunlight Station for always taking care of me! 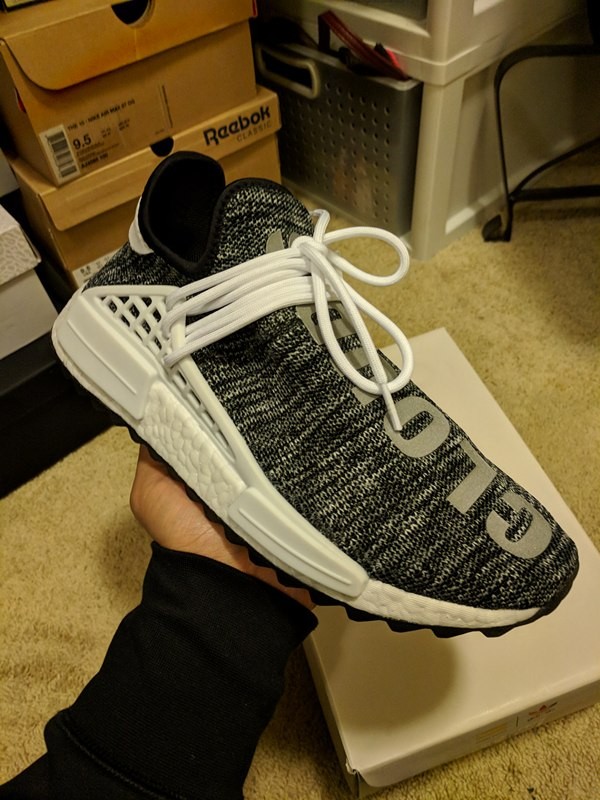 Even though they took like a month to get to me from StockX, the adidas Pharrell Williams Human Race NMD Trail in the Oreo colorway gets the nod at #4.  I know some aren’t a fan of the ironed on lettering, (it’s 3m though!) but the the black/grey/white heathered primeknit upper is a real winner in my book.  I’m a pretty basic dude, most of my clothes are black, white, and/or grey so this shoe pretty much goes with everything I wear.  I pride myself a bit on being a well-round sneaker enthusiast, so I really wanted to add a Human Race NMD to my collection and am super happy to own a pair, especially at the low price I got them at. 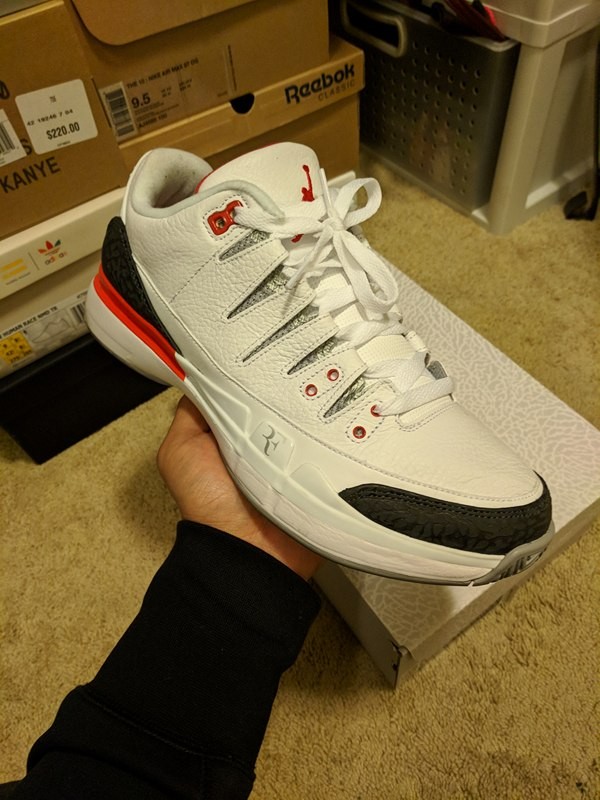 The Air Jordan 3 is my favorite Jordan silhouette of all time, with the White Cement 3 being my favorite colorway.  Roger Federer is my favorite tennis player of all time.  So when these two things come together, then yeah, copping a pair is a must.  The Vapor Tour series is my choice of footwear when I play tennis (I don’t play as much as I like, but I’ve always loved the sport), so this collab was a no-brainer for me.  This particular pair was a Christmas gift I received from my sister and her boyfriend, so a big thank you to you two for getting me this amazing pair for Christmas.  I am forever grateful! 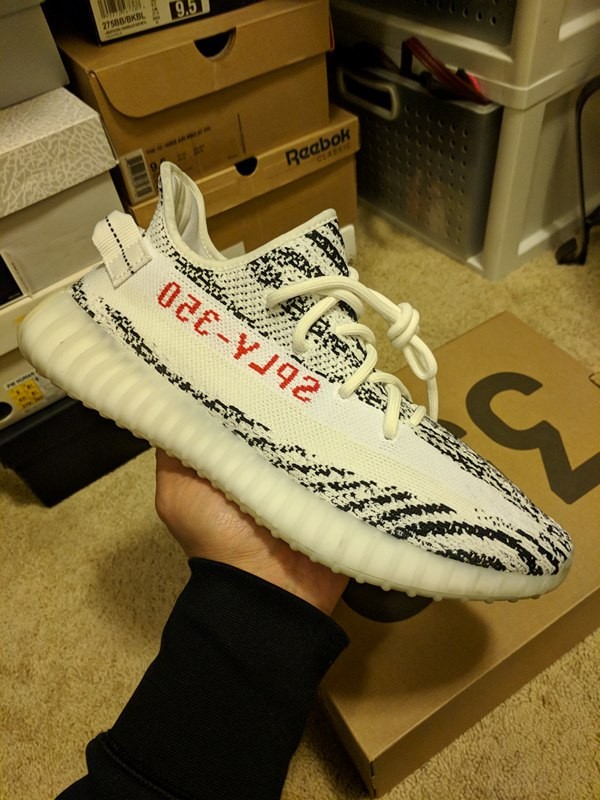 Yeah, yeah, I bought into the hype a little too. I’m not the biggest Kanye fan, but the zebra version of the 350 V2 was by far my favorite colorway that has released thus far.  The colorway is very wearable, but at the same time with the boldness of the zebra print and the red hits it’s a super loud shoe too.  The V2 has lost a lot of luster for me on the other hand.  Maybe it’s a hypebeast thing to say, but when you see 12 year olds rocking 350 V2s all the time, it makes it tough for me to wear them as often as I’d like.  Nonetheless, this model was an obvious game changer, I’d be a fool not admit that much.  My favorite colorway of the model had to make this list, no questions asked. 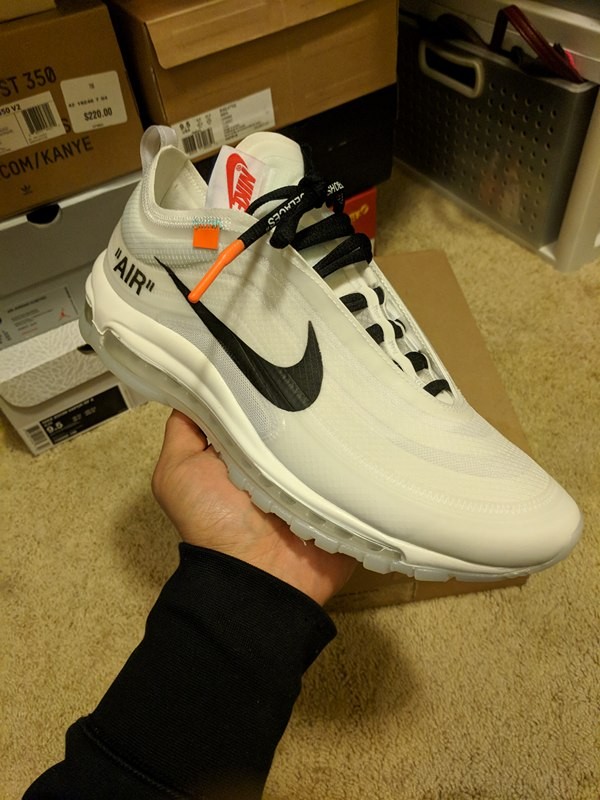 It should be the Silver Bullet Air Max 97 since I probably wore than sneaker more than any other sneaker this year, but aesthetically, the Off White version of the 97 just takes the cake for me.  It’s my favorite 97 of the year, and my favorite of “the ten” that Virgil Abloh collaborated on with Nike.  The OW version is the definition of clean, and yes the zip tie is staying on I don’t care what you say lol.  I’ve also switched on the right sneaker’s laces from the white-green tip to the black-orange tip for some extra flair (pictured).  FYI, the laces are damn near impossible to change out on these, it literally took forever!

So, there you have it.  My top 10 sneaker pickups of 2017.  I hope you enjoyed the list!  Have a happy and safe New Year’s Eve everybody!