This is precisely the time of year when everyone is coming up with lists to highlight their favorites from this past year in sneaker releases and pick-ups. For the most part, my year of sneaker pick-ups was very low-key, but I had one chance to pick-up the one sneaker I was highest on this entire year, and probably blew my chance at ever winning another raffle from the boutique again.

I was just like everyone else that week, following 15 different IG accounts, mentioning 12 different friends in the comments, auto-filling my name, address, and shoe size in every Gleam raffle form, trying to get my hands on any of the Off-White “The Ten” sneakers. Out of all of them, I really wanted that Jordan 1. I always knew that the Jordan 1 was going to be the most difficult to get, since it seemed to be the most sought after sneaker (now that the dust has settled, I personally think the AM97s are 1b out of the Ten, right with the Jordan 1. Anyways…) After spending all week filling out raffles, and getting zero responses like the majority of us, I get the Kith email, late in the day. An email confirming my raffle win on the Off-White Air Jordan 1. It was unreal. 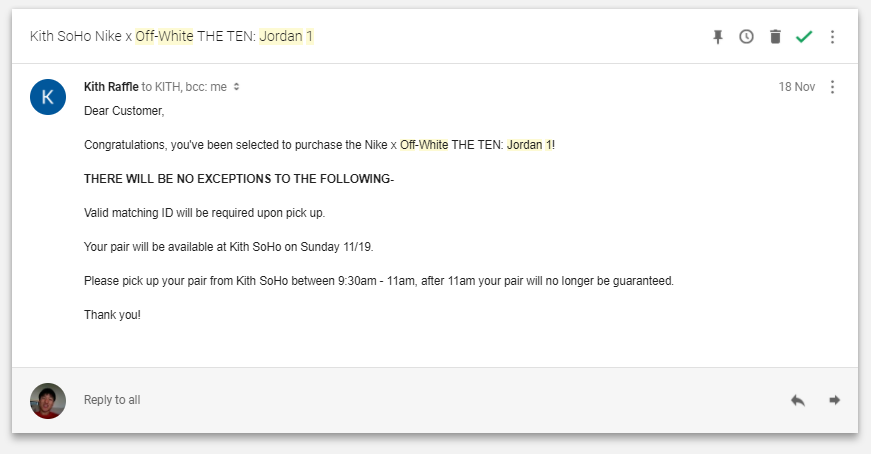 What’s amazing about sneakers is that you get to meet people who are just as crazy, and nerdy, about sneakers as you are. Who knew perusing the back pages of Slam Magazine to check out the latest And1, Reebok, adidas and Nike basketball sneakers, in between the k1X ads, would lead to me having friends that probably did the same, and more? So when I messaged Jen and Paul, both writers I met here on Collective Kicks, the screenshot of the email, they freaked. I mean, you can only freak out so much using GIFs and emojis, but when I say they freaked, they [insert Jonah Hill GIF] freaked. And I was super excited to. But there was one issue: the pick-up time was smack in the middle of my Sunday morning church service. And I would be in Blue Bell, PA, a good two hours away from the SOHO Kith location.

If you’re unfamiliar with contemporary Christian worship, instead of a choir of people being accompanied by an organ or a piano, you have instead a band, usually consisting of percussion (tradition drum kit), piano, synth/keyboard, and guitars. Back in the 80’s and 90’s, worship music sounded more like pop/country ballads (FYI, I don’t even know if a country ballad is a thing), but nowadays it has a much more ambient rock type feel. If you don’t know, check out this video here to get a better idea of what contemporary Christian worship feels like.

I am what they call a worship leader, so I stand on stage, with my electric guitar, and play and sing. I lead the congregation in songs that I chose the month before, and that my team practiced the Saturday before. And we play both a the beginning of our worship, which starts at 1030AM, and at the end, which usually ends around 12PM. In addition, we have a time after worship for study in a smaller group setting, which runs us till about 1PM. If you look back at the email, I missed the entire pick-up window, with no way around any of it. It would not only have been dirty looks from my wife if I dipped and went to SOHO, but there would be a lot more questions surrounding my character as a leader if I did. So, I committed to my usual Sunday routine, and decided I’d take off right at 1PM.

Again, it’s so great having friends who care just as much about sneakers as you do. As I was driving to Kith at 1PM, my friends were speculating and hoping that I’d be able to pick-up the pair. Two hours of driving, anxiously hoping I’d be able to walk in, and I’d at the very least have a chance to talk to someone about possibly picking up a pair, even outside the raffle window. It’s a once in a lifetime chance, I’m sure they know that, I’m sure they’ll let me pick up, they have to know what it’s like to be in my shoes I kept thinking.

Sure enough, I arrive, and see a line outside of the new SOHO location, with people who have bags filled with Off-White sneakers. It’s for a different pair, so I walk right in, straight to the counter, and spoke with one of the girls who was manning the register that day.

“It’s on it’s way back to the warehouse, ‘no longer guaranteed’ means that you lose it if you don’t pick-up during your window”.

If I went back and replayed the same scenario 10 times over, I would have made the same choice ten times. As unimportant as church may be to most of you, it’s the one constant in my life. Even though I partake in this gluttony we call sneaker collecting, even though I lust after sneakers I’ll never have, but really want, even though I probably know more about sneakers that I do stocks or my 401K (one of my goals in 2018, btw, to understand my 401K…), the foundation my life is built on is what Christ did for me on the Cross.

To be honest, I was in on the Jordan 1 to rock them, and insisted to my friends I’d sit down, put them on, and dance in the streets of New York City. It wasn’t about the resale value. It was the careful manner in which Virgil Abloh deconstructed, and reconstructed, the sneaker that I was obsessed with. The detached Swoosh logo. The way the panels of leather around the ankle hung loose, the same way they did on Dunk mids. The “AIR” on the midsole. But most of all, the orange and green laces that came with them, that contrasted in a way I could have never envisioned.

Another full year of releases, with a ton of leaks already (i.e. Jerry Lorenzo collaborating on a pair of Nikes in 2018, Shadow 1 rerelease, more Off-White Jordan 1s) is ahead of all of us. I couldn’t move on to 2018 without putting this story out. I’m not here to say I’m better than the next person, because I still drove two hours to Kith, and embarassed myself out of Kith by missing the raffle pick-up time. It was just so close to owning my absolute, clear cut, number 1 sneaker of 2017. We all know the feeling of adding to cart but being unable to checkout. We all know the feeling of checking out, but getting your shipment cancelled (I mean, there’s some of you out there, right?).

Man, I was so close.

Thanks everyone, Happy New Year, and hope you all get your fair shot at copping your favorite sneakers of 2018.