So we have been seeing the images of these Air Jordan 9 Retro “Barons” colorway, but do we know what they are about? See below for more history, but when Jordan retired from the NBA, he had a short stint in Baseball.  He played on a team called the Birmingham Barons” and that is what these shoes are themed after.  His number was also 45, the same number he wore for his Laney High School team.

More about MJ playing on the Barons Via MILB

Facts on Michael Jordan’s only season in baseball with the Barons in 1994:

•   Wore #45 for the Barons, the number he wore for his Laney (NC) High School baseball team.

•   Assigned to the Barons roster March 31, 1994, setting of a frenzy of interest never before seen in minor league history.

•   Jordan joined the Barons April 8 after playing in the Windy City Classic exhibition game April 7 for the White Sox against the Cubs, where he was 2-5 with 2 RBI … started in right field in 1st official pro game for the Barons against Chattanooga … flew out in first at-bat vs. John Courtright and went 0-3 in front of 10,359 fans and 130 members of the national and international media. 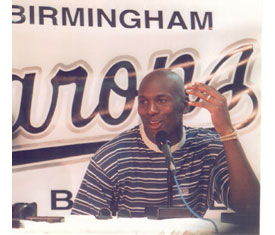 •   Drove in 1st run, a bases loaded single which scored Steve Sax, and stole 1st base April 11 vs. Knoxville.

•   The JordanCruiser made its debut April 14 as the bus took the Barons to Chattanooga for the first road trip of the season … contrary to popular belief, Jordan did NOT buy the bus, but his likeness did.

•   Drove in first of seven game-winning runs on the season April 28 at Huntsville with a 7th-inning double … it broke a 4-4 tie and gave the Barons a 9-4 win.

•   Ended one of the wildest finishes in club history on July 6 … Barons were no-hit by Huntsville’s Steve Wojciechowski through 8 innings … Barons rallied in the 9th and pulled within 5-3 with the bases loaded and 2 out … Jordan hit a grounder to third, which was thrown away into right field, clearing the bases for a 6-5 win.